The creation of an active and stabilised microbial population in an effluent pond on one northern Victorian dairy farm has all but eliminated a half-metre-thick, stinking surface crust and significantly increased its operating capacity.

Kevin Fitzsimmons and his wife, Faye, milk 110 registered cows at Jasam Holsteins, Merrigum, 30 kilometres west of Shepparton. Milking twice a day in an eight-a-side double-up dairy, Kevin has a single small effluent pond that, in recent years, has struggled to cope.

Effluent is washed into a holding tank at the dairy and pumped 100 metres to the pond, where it is held for three to four weeks before being used to irrigate paddocks.

“It’s a battle to separate the solids in a single pond, so unless we excavate it regularly it crusts up on the surface and the solids build up on the bottom,” said Kevin.

“We clean it out every couple of years, but it hasn’t been very effective. It smelled bad and the crust on top was up to a couple of feet thick. “We had a couple of cows that wandered out onto it. Their legs broke through but the crust was strong enough to hold their bodies up.”

“It’s a battle to separate the solids in a single pond, so unless we excavate it regularly it crusts up on the surface and the solids build up on the bottom”

Last spring, Kevin agreed to participate in a trial using Digest-it®  for Dairies, a fermented culture that helps to create and maintain a balanced microbial environment in effluent ponds.

Depending on the thickness of the surface crust, a number of physical and chemical changes can be observed in ponds within four to six weeks of treatment. These include increased bubbling due to increased aerobic microbial activity and reduced surface crusting, turbidity, solids and odour. 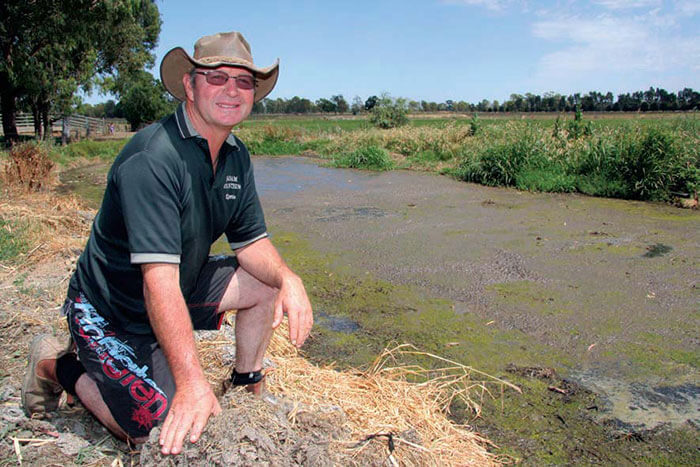 The surface crust on Kevin Fitzsimmons’ effluent pond has all but disappeared six weeks after treatment with BioAg Digest-it for Dairies.

In the longer term, nutrients that are otherwise ‘locked up’ in suspended solids are converted into a rich source of plant-available nutrients, reducing the need for desludging. Hence, the nutrients recovered reduce the need for fertiliser in the pasture.

In October, after flushing out the pond, Kevin applied 10 litres of Digest-it as a high-pressure spray to the crust and pond surface. A month later, he applied another eight litres. Since then, he has poured one litre of the product onto the concrete apron before it is hosed down after each morning’s milking. Three months later, he couldn’t be happier with the result.

“I’m really impressed with it,” he said. “Activity in the pond has increased, the foul smell has gone and you can see it bubbling from one end of the pond to the other,” he said. “I can see it changing every day. The surface crust has all but disappeared and without that two-foot layer on top, the dam has much more capacity than it used to. “Hopefully there are less solids building up on the bottom as well. Every now and then, these big chunks pop up to the surface like a volcano!

Before treatment with BioAg Digest-it for Dairies.

“I can go longer between waterings and there’s more water to irrigate with. I no longer have to clear the blockages from the outlet pipe, and I think the water quality will improve over time.

“Digest-it is going to be a better way to go in the long term than excavating because it’s actually improving the activity of the pond.

“When you excavate it, you’re simply removing the sludge and it soon goes back to the way it was.

“Environmental standards are always getting tighter and if we can keep a step ahead of those, we’ve got to be on a winner.”

“I can go longer between watering and there’s more water to irrigate with. I no longer have to clear the blockages from the outlet pipe and I think the water quality will improve over time.”