A biological soil nutrition program is enabling Victorian farmers, Gavin and Vikki Bensch, to shrug off the effects of the drought and produce some of the best clover hay they have ever grown.

Gavin and Vikki grow about 180 hectares of clover hay, wheat, linseed, field peas and oats on their 350 ha property, ‘Kengurra’, near Dunkeld in the Western District.

They also run 1,500 superfine Merino ewes, some of which are joined to Poll Dorset and Southdown rams for prime lamb production, and a small Angus beef herd.

A fourth-generation farmer in the region, Gavin has long been concerned about the ongoing effects of acid fertilisers and the use of crop protection products on the health of his soils.

“I am no longer comfortable about using a lot of conventional fertilisers and pesticides,” he said. “I’m more interested in getting production out of the soil naturally rather than forcing it out unnaturally with synthetic fertilisers.”

Gavin began to consider the merits of biological farming about three years ago after attending a farmer meeting addressed by BioAg Agent, Noel Horan. 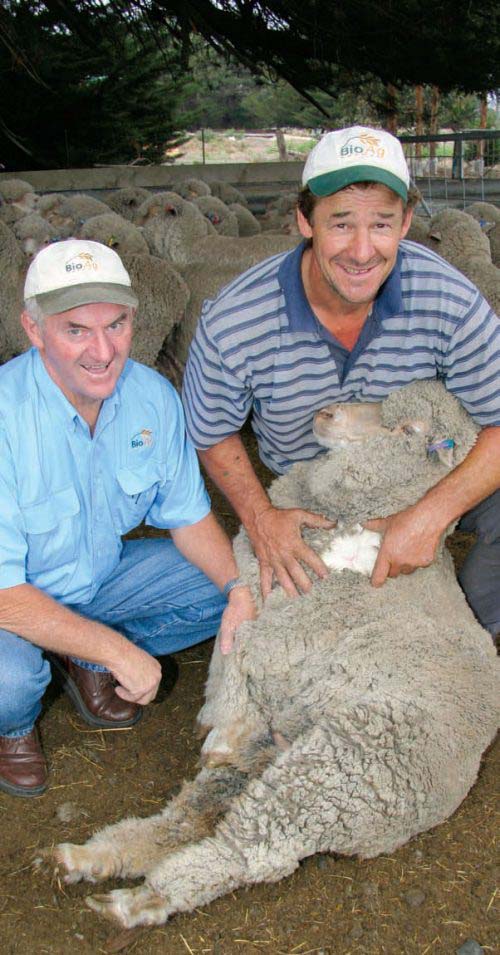 A key product is BioAgPhos®, a reactive phosphate rock that has been treated with a proprietary microbial culture to provide an immediate and continuing source of plant available phosphate.

About half of the phosphorus content is available immediately for plant use, while the remainder is slowly digested by microorganisms and added to the nutrient reservoir in the soil.

“My main concern was the health of the soil, so I decided that biological farming was worth a try,” Gavin said. “When Noel spoke to us about reactive phosphate rock, I thought it sounded much better than throwing out sulphuric acid on the ground.

“I never knew how many microbes and fungi live in the ground. If they’re natural, they must be there for a reason and if you can grow something naturally, surely that’s a better way to go.”

The first step was a soil test by Southern Cross University’s Environmental Analysis Lab in Lismore, which was used as the basis for the BioAg nutrient program.

In early 2005, Gavin used a belt spreader to apply 10 tonnes of BioAgPhos at 100 kg per ha on his cropping country. A recently-purchased block, which had not had not been fertilised for 24 years and was low in phosphorus, received 250 kg per ha of BioAgPhos.

Last year he applied 30 tonnes of BioAgPhos, spreading it over most of the farm, and this year he plans to spread a further 40 tonnes. Gavin also applies two liquid treatments, BioAg Soil & Seed™ and BioAg Balance & Grow®, which stimulate vegetative growth and improve soil microbial activity.

“The soil is more friable and easier to work, but the quality of our pastures and crops has probably been the main thing so far.”

He believes the benefits of biological farming will become more apparent as rainfall patterns return to normal.

“Once we get some good rain the crops and pasture are really going to kick because we’ve got that slow release fertiliser in the ground,” he said.

“We’ll know more when we do more soil tests later this year. In the meantime, we’re pretty happy with the early results in spite of the dry conditions. The soil is more friable and easier to work, but the quality of our pastures and crops has probably been the main thing so far.

“The first season some of our crops yielded 5t per ha. Last year, which was a particularly dry season, our wheat yielded 2.5 t/ha and our oats 5 t/ha with good straw and good colour. We’ve always had good quality hay but this year one horse trainer said it was the best he had ever seen. He couldn’t believe how green and lush it was.”