Southern NSW farmers, Malcolm and Kerrie Plum, noticed a dramatic improvement in the health of their livestock since they began adopting biological farming techniques over 15 years ago.

Previous animal health problems, including bloat, grass tetany and milk fever in cattle and lambing sickness in sheep, have all but been eliminated with the use of ‘biologically active’ fertilisers that have added new life to their soils. 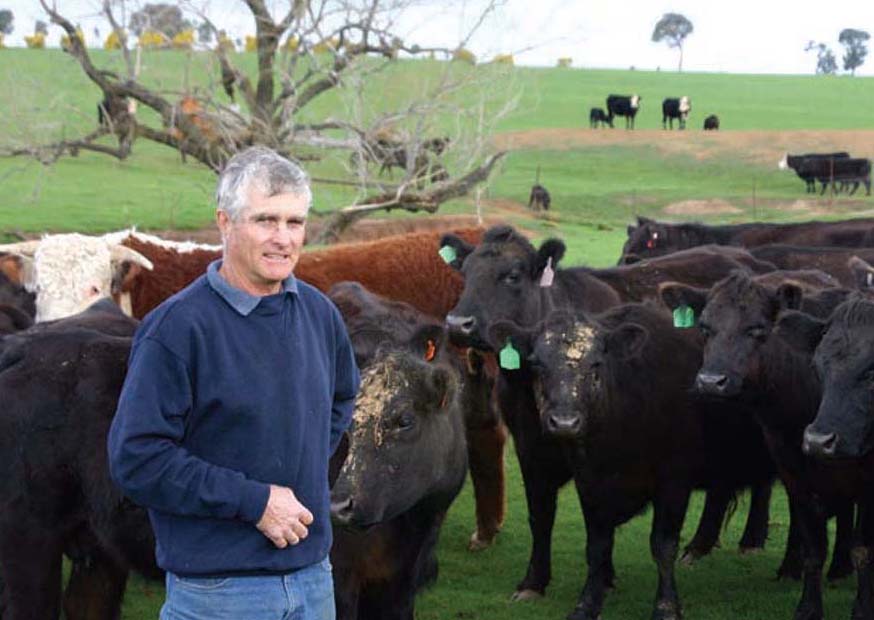 The Plums conduct a mixed farming operation on their 410 ha property, ‘Burradool’ near Tarcutta, 40km south-east of Wagga Wagga. In a typical year, they grow up to 120 ha of dual-purpose wheat, oats and lupins.

The enterprises are tightly integrated, with the wheat and oats providing up to two months of winter grazing for the sheep and cattle before being ‘locked up’ until harvest. Some of the grain is kept for stock feed, while the remainder is sold.

The Plums conducted a fairly conventional farming operation until 15 years ago, when they began to notice a marked decline in soil quality and increased compaction. “We were pouring expensive inputs onto our pastures and crops just to keep them growing,” Malcolm said.

“We wanted to produce nutritious food. We could not achieve this if our soils were deficient in nutrients.”

“We wanted to produce nutritious food. We could not achieve this if our soils were deficient in nutrients. We sought a more sustainable farming system that encouraged healthier soils that would grow healthier plants.”

The Plums elected to stop using synthetic fertilisers and began adopting biological farming techniques in a bid to encourage microbial activity in their soils. Central to this was the use of ‘biologically active’ solid nutrients and fermented liquid cultures by BioAg.

The Plums apply 120kg per ha of BioAgPhos and 300kg per ha of lime to their cropping paddocks and pastures each autumn using a belt spreader. A further 20 to 40kg per ha of monoammonium phosphate (MAP) fertiliser is applied at sowing.

The liquid treatments, Soil & Seed™, Balance & Grow® and Fruit & Balance™ are applied immediately before sowing, six to eight weeks after sowing and when the crop is between first and second node stage, respectively.

Applied as soil, foliar or stubble treatments, these formulations aim to deliver essential nutrients and metabolites directly to pastures and crops, as well as stimulate soil microbial activity.

Malcolm Plum said there had been a noticeable improvement in soil texture and structure in recent years, leading to quicker pasture response after rain, and healthier stock.

“Every time we apply a BioAg product, we are feeding the soil microbes that are already there,” he said. “The micro-organisms in the soil are building up at a tremendous rate.”

“Our pastures are much more nutritious and the crops are really benefiting. But improved animal health is at the top of the list, with bloat and grass tetany being almost non-existent.”

“We have had cases where there were no problems at all with livestock grazing paddocks that had been treated with various BioAg products, and then run into huge problems when we shifted them to paddocks that had received fewer treatments. The difference is pretty clear-cut.”

“A conventional agronomist would say we’re wasting our time putting on such small amounts of nitrogen, but we are getting a tremendous response.”

The Plums also spray their lucerne and phalaris pastures with Balance & Grow to stimulate feed supply during the calving and lambing period in late winter. “We spray Balance & Grow mixed with 3-4kg/ha of calcium nitrate as soon as there’s enough green foliage, which could be three weeks to a month after the autumn break,” Malcolm said.

“A conventional agronomist would say we’re wasting our time putting on such small amounts of nitrogen, but we are getting a tremendous response. Last year, it didn’t rain until June 11 and by July 20 we had sufficient green feed on which to lamb the ewes.”

The Plums implement a minimum-till cropping operation and aim to reduce the number of passes by tank-mixing various treatments, both biological and conventional, wherever possible. However, Malcolm cautions that all combinations should be tested in a jar before being mixed in commercial volumes.

He described his biological farming system as ‘a work in progress’. “We make a good return off our 410 ha but we have to farm smarter to do it,” he said.

“We’re always learning better ways to manage it. For example, the amount of MAP we apply at sowing is decreasing every year.”

BioAg markets a range of biologically-active nutrients and programs that help to produce a living, healthy and balanced soil for optimum plant and livestock productivity.