The importance of soil carbon

The importance of soil carbon

Building soil carbon also requires nutrients to be present in the soil. The transformation of organic residues into humus (the accumulation of organic carbon­) by soil organisms requires nitrogen, phosphorus and sulphur and other elements in smaller quantities. 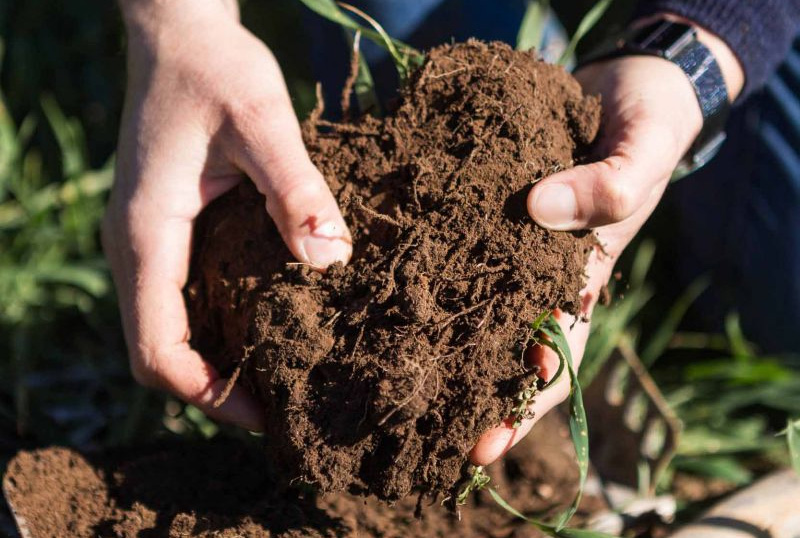 Soil carbon levels increase when carbon-based inputs are greater than the losses. The main losses of carbon from the soil are through organic matter decomposition, soil erosion, biomass burning.[vi]

The greater the amount of crop residue (straw, stubble and roots) that can be returned to the soil, the better. Recycling as much as possible of the residues from all kinds of harvested crops (trees, cereals, grazed pastures, orchards and vineyards) is beneficial for maintaining or increasing soil carbon.[vii]

Productive perennial pastures incorporating grass species with extensive root zones are known to improve soil carbon levels.[viii] Dry matter from pastures will decay in the soil and when pasture is grazed or harvested, for hay or silage, plants will shed roots which will decay into organic carbon. A pasture phase in any crop rotation is an efficient way to build soil carbon.[ix]

Examples of soil with less than 1%, 2% and 3% organic matter from left to right, respectively. Photo: Jodi DiJong-Hughes

BioAg has a range of biostimulants, with high organic carbon content, which have been developed as a food source for plants and beneficial soil micro-organisms and to increase soil carbon levels.

BioAg Soil & Seed is formulated to improve soil microbial activity. It acts as an excellent soil inoculant, feeds and expands the volume and diversity of beneficial soil micro-organisms as a catalyst to improve plant availability of both soil borne and applied nutrients. Treated soils demonstrate improved structure, water infiltration, tilth and field capacity, along with natural plant pathogen suppression.

Independent trials in a wide variety of crops attest to its efficacy in improving yield and quality.

Using protein clipping, biochemical analysis and DNA analysis, CIAAF determined the changes in the microbial biomass (fungi and bacteria) in each sample, the results were a significant increase in microbial levels:

In addition, there were nutrient increases within the soil biomass and in the levels of carbon in soils.

BioAg HydraHume (potassium humate) directly contributes to humus development. It is an efficient promoter of plant growth and increased root mass, while also improving the effects of fertilisers. HydraHume rapidly accelerates the microbial activity in soils, developing soil carbon and reducing nutrient lock up. HydraHume is derived from Leonardite, one of the richest sources of humic acid available.

BioAg’s team of area managers develop programs and provide advice for farmers across the range of farming approaches. We work with farmers who practice what you might call conventional farming’ and have an interest in regenerating the soil. We also work with farmers who have committed to natural fertilisers and a strong focus on regenerative agriculture.