The adoption of organic farming techniques has increased the net income of Upper Murray dairy farmer, Don Jarvis, by a tidy 25 percent, as well as significantly improving natural soil fertility and animal health.

A long-time exponent of biological farming practices, Don seized the opportunity to switch to full organic production in the lead-up to deregulation five years ago. His decision has proven to be not only financially-sound, but has helped to resurrect the natural vitality of the family farm.

“We lost our Sydney milk quota and half our income overnight, so we needed an alternative,” he said. “A small organic milk factory had started up in Corryong and they wanted us to supply them, so I decided to give it a go.”

Don now supplies the Organic Dairy Farmers Co-op, based at Korumburra in South Gippsland, which markets its own range organic dairy products as well as wholesaling organic milk to other processors.

The venture is now returning significantly more than the price Don once received for his quota milk – and a good 25 percent higher than typical prices for ‘normal’ milk.

The venture is now returning significantly more than the price Don once received for his quota milk – and a good 25 percent higher than typical prices for ‘normal’ milk.

Don and Denise Jarvis, together with their son, milk about 200 Holstein cows on their 340 ha property at Tooma, near Corryong. They calve year-round. The property features dark loam soils along the river flats and granite-based soils in the surrounding hill country. The average rainfall is 800mm. Don has taken a proactive stance towards improving soil structure and fertility for more than 20 years. “Soil health is paramount to production,” he said.

“Healthy soils produce healthy grass which, in turn, produces healthy animals. It follows that healthy animals produce healthy food, which when eaten by humans, produces healthy people. It’s all linked and it starts in the soil.” In the 1980’s, he started cutting back on conventional acid fertilisers and began treating his pastures with lime, dolomite, gypsum and paramagnetic rock (a type of crushed basalt).

The Jarvises implemented a custom-made BioAg fertiliser program which incorporates biologically active solid nutrients and fermented liquid cultures. Don typically applies 100 to 200kg/ha of BioAgPhos and up to 500kg/ha lime using a belt spreader each autumn. “It’s best to spread it just after the autumn break so you’re putting the live bugs in the BioAgPhos into warm, moist soil rather than hot, dry soil,” he said.

The whole farm is then treated with 3L/ha of BioAg Soil & Seed™. In spring, the irrigated pastures are treated with a foliar application of 3L/ha of Balance & Grow®. Both applications include 4kg/ha of microfine lime and occasionally, a small amount of concentrated Norwegian seaweed powder.

Whereas the average soil pH was once as low as 4.8, today the soils are approaching neutral, with some irrigation bays at a pH of 6.3. The topsoil is rich with humus and worms, a legacy of an innovative large-scale worm farm fuelled by dairy effluent.

The effluent wash is collected into a pit lined with cereal straw. The solids are left to ‘brew’, while the liquids are pumped daily onto the pastures. Every two weeks, a front-end loader is used to shift the solids from the pit to a windrow.

Introduced worms then work through the windrow to create a rich natural fertiliser that is spread at 400kg per ha each autumn. “We are trying to build up the soil biology and this compost contains a huge bank of bacteria, fungi and worm eggs,” Don said. “The compost has to be dry enough so that we can spread it but it also has to be moist enough that all the bugs that are produced in it survive and work their way into the soil.” 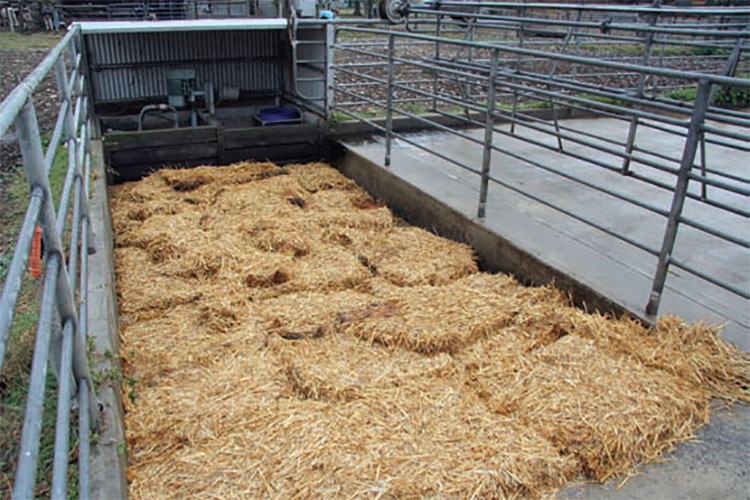 Dairy effluent is collected in a straw-filled-pit and then composted.

Don said the biological farming system has also had a noticeable effect on animal health. In fact, he estimates that his yearly vet bill has been slashed by 90 percent. Bloat and milk fever are rare, while somatic cell count is more than acceptable (160,000 to 200,000 cells per millilitre) even though the Jarvises do not use antibiotics.

“If the cell count starts to get up towards 250,000 I put some apple cider vinegar and garlic in their drinking water and usually it’s dropped down about 50,000 at the next test,” Don said. “I don’t know why it works, but it does. I’ve proved it over and over again.”