The use of a ‘biologically active’ microbial culture is playing a small but significant role in helping to turn seven megalitres of liquid waste into $150,000 worth of nutrients, on one of Australia’s largest dairying operations.

James Mann and his wife, Robyn, milk almost 2000 Holstein and crossbred cows producing more than 18 million litres of milk a year at Donovan’s Dairy, near Mt Gambier. Everything on the operation is bigger – from its 116-stand rotary dairy to the massive amount of liquid effluent produced from wash-down each milking.

Conscious of their environmental obligations and the sheer volume of waste produced, the Manns installed a state-of-the-art effluent disposal system.

“Our operation produces about eight times as much effluent as the average dairy, so we need a system that achieves all of our environmental responsibilities yet is easy to manage,” James said.

“We’re on limestone country so the waste pit and effluent pond are both lined with concrete to prevent seepage into the groundwater. “Our wash-down is captured in a waste pit and is then split into solid and liquid components by a screw press. “This enables us to use the solid and liquid wastes separately to fertilise our pastures and crops.”

“Our operation produces about eight times as much effluent as the average dairy, so we need a system that achieves all of our environmental responsibilities yet is easy to manage”

“We didn’t get much change out of $100,000 from the screw press and its associated infrastructure, so you’d probably have to be milking at least 500 cows to make one worthwhile.” The screw press produces a product that is 90 per cent dry matter, which is then stockpiled and spread over cropping paddocks.

The liquid component is stored in a seven megalitre effluent pond before being pumped through four centre pivots at one to two per cent concentration, to irrigate pasture and crops.

Despite good planning and management, the effluent pond has gradually filled with small diameter solids and sand carried into the dairy by the cows. As a result, only half the pond’s capacity can be drawn off for irrigation before the liquid becomes too thick for the pumps to handle or blocked sprinkler heads.“Our effluent pond is wide with a flat base, so it is prone to filling with solids,” James said. “In the past we’ve had to clean out the pond every two years, which is time-consuming and expensive.”

Last spring, the Manns agreed to participate in a trial using BioAg Digest-it® for Dairies, a fermented culture that helps to create and maintain a balanced microbial environment in effluent ponds. Digest-it provides a rich source of dormant aerobic bacteria and an additional food source for microbes, thereby stimulating microbial digestion of organic matter.

Depending on the thickness of the surface crust, a number of physical and chemical changes can be observed in ponds within four to six weeks of treatment. These include increased bubbling due to increased aerobic microbial fermentation and reduced surface crusting, turbidity, solids and odour. 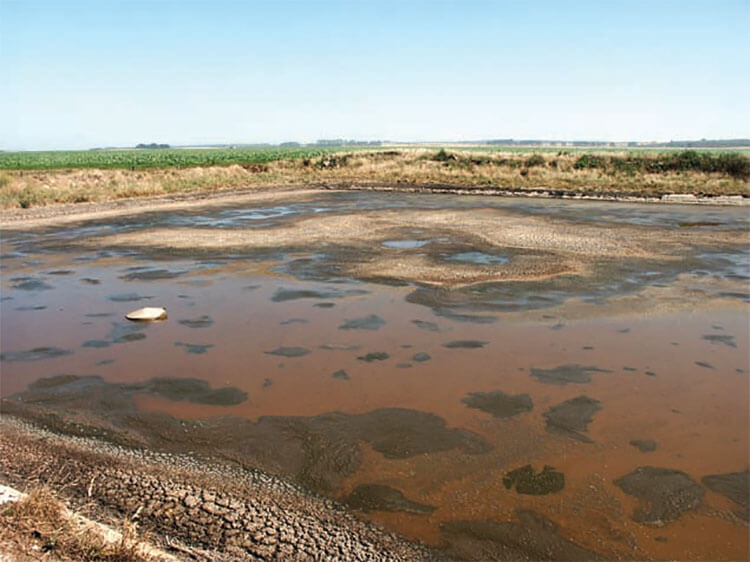 In the longer-term, nutrients that are otherwise ‘locked up’ in suspended solids are converted into a rich source of plant-available nutrients, reducing the need for de-sludging and fertiliser inputs.

The Manns ‘activated’ the pond by spraying 20 litres of BioAg Digest-it for Dairies as a high-pressure spray to the crust and surface and then a further 20 litres to the pond itself.

An additional five litres of the product is poured onto the concrete apron before it is hosed down after each morning’s milking. Production manager, Jim Simpson, said the effluent pond had become much more active, and the amount of liquid available for irrigation had increased. “We’re probably not seeing its full effectiveness because we are drawing off large volumes for irrigation, but there’s no doubt the Digest-it is breaking down a lot of the solid matter,” he said.

“In the past, we could only draw off half the liquid, but now we’re pumping out another 10 to 20 per cent. “There’s constant activity, with bubbles rising to the surface, and the sludge islands we used to get on the surface have mostly disappeared. “The liquid coming out of one of our two pumps is cleaner and smells a lot better.

“We’re going to test the liquid to see what the nutrient levels are like, but we reckon we’ve probably got about $150,000 worth of fertilisers sitting in that pond. “If we can pump more liquid out of that pond, without the pumps and sprinkler heads blocking up, then we’ll have more nutrients available for the whole season. “And if the Digest-It is going to make those nutrients more readily available to the plants, then we’ll be able to spend less on fertilisers. “That’s not a bad result from an annual investment of just a few dollars per cow. “We’re already noticing a significant difference in a maize crop we’re irrigating using liquid from the pond though we can’t confirm this scientifically.”

“In the past we could only draw off half the liquid, but now we’re pumping out another 10 to 20 per cent.”

While it’s still early days, Jim is sufficiently convinced that he intends to continue using Digest-it. “It seems to be doing its job and we’re going to keep on using it,” he said. “It won’t do anything about the sand that builds up on the bottom of the pond, so we’re going to clean it out over winter and then recharge the pond.

“We don’t pump much out for irrigation during the winter months, so this will give the microbes a chance to do their work. “It will be interesting to see how the pond is looking next spring.” Digest-it is also being used to help break down the solids stockpile.