The adoption of a biological nutrition program three years ago has significantly increased the profitability of Dareton district citrus grower and packer, Tony Barila, by improving fruit quality, yields and consistency.

As a grower, he was experiencing a number of problems which he attributed to poor soil fertility. “I used to get a lot of small fruit, yellow leaves, fruit drop and alternate bearing,” he said. “Like every grower, I know that fruit and quality are a direct result of nutrition, so I kept on applying gypsum, manure and granular fertiliser whenever I thought my trees needed it. And if I had a particular problem, my fertiliser rep recommended me to apply some more of something else!” 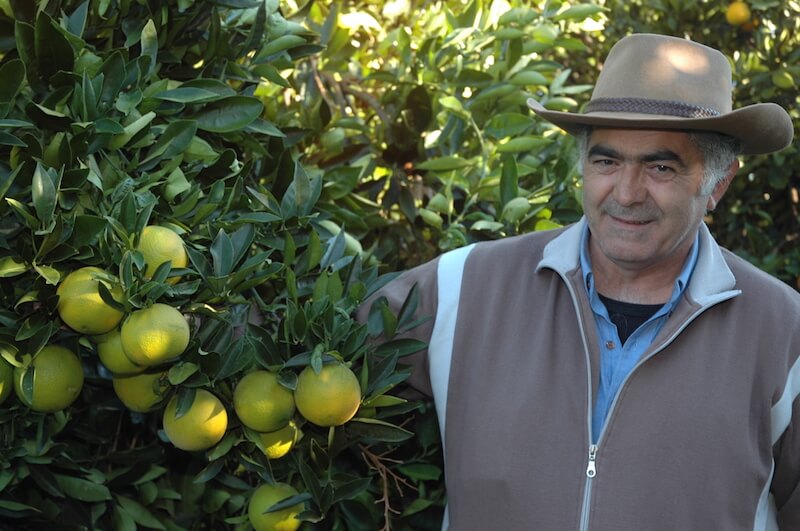 “I was packing fruit from Palinyewah Producers three years ago and I saw how much bigger, firmer and better their fruit was. I asked their manager, Peter Donaldson, what was he doing and he told me to contact BioAg.”

“They told me I was applying nutrients that were not needed,” Tony said. “They told me not to apply anything more and to start concentrating on getting my trees to utilise what I had already applied. I thought he was nuts but I was willing to give it a go because I wanted better fruit and Peter Donaldson had so much good to say about BioAg.”

BioAg developed a year-round fertility program based on soil and tissue analysis. The program, which aims to apply smaller but more frequent amounts of plant-available nutrients, incorporates a range of BioAg and conventional inputs.

“As a grower, he was experiencing a number of problems which he attributed to poor soil fertility.”

The block now receives an annual application of 350-500kg per ha* BioAgPhos® a phosphate fertiliser made from high-grade reactive phosphate rock, 350-500kg per ha* sulphate of ammonia during spring. The nutrients are applied using a belt spreader between the tree rows. In addition, 1-1.5L per ha* of BioAg Soil & Seed™ (a liquid treatment that encourages root development and soil microbial activity) and 15-25kg per ha* of calcium nitrate (a rich source of calcium and nitrogen) is applied at approximately 21-day intervals throughout the growing season year via the fertigation system.

During early flowering and fruiting, 1.5-2.5L per ha* of BioAg Balance & Grow®, a liquid microbial culture which stimulates vegetative growth and improves soil microbial activity, mixed with small amounts of calcium nitrate and micronutrients as needed, is applied as a foliar spray at 21-day intervals. During maturation, 2-3L per ha* of BioAg Fruit & Balance®, a foliar treatment which delivers a rich source of nutrients to enhance yield and quality, and monoammonium phosphate (MAP), is applied.

Tony follows the recommended program to the letter. “BioAg know what they are doing and there is no point in cutting corners. They give me a program and I follow that.”

“I thought it would take two years to see some kind of result but it was only a matter of months before I noticed a big improvement. My trees were suddenly green and healthy, even though I wasn’t applying any iron, zinc and hardly any gibberellic acid or copper.”

“I thought it would take two years to see some kind of result but it was only a matter of months before I noticed a big improvement. My trees were suddenly green and healthy, even though I wasn’t applying any iron, zinc and hardly any gibberellic acid or copper.”

“We just have healthier trees and when you have healthy trees, you have good crops. In one section, I used to get 140 bins. Last year, we picked 240 bins and we will do about the same again this year.”

“To me, it’s all about pack-out. As a grower, I averaged $114 per bin where as a lot of guys got $30 or $40. This is because I can pack a lot more boxes out of every bin of better fruit and make more money from export. A lot of growers think all fertilisers are good and therefore more is better. But they don’t realise that a tree can only take up so much. Anything more than that is a waste and can cause more harm than good.”

“They say they can’t afford to change their program, but you can’t afford to keep on making the same mistakes. My program costs about the same, if not less, than before! We are applying significantly less inputs and insecticides than before. We spray a preventative at flowering to control thrips, but that’s about it.”

“This is offset by increased application costs. The BioAg program involves a lot more spraying, but I would rather be spraying nutrients instead of insecticides or fungicides.”

Tony and his wife, Pat, purchased their 10ha property 15 years ago after spending 12 years as fruit and vegetable wholesalers in Adelaide. “This place was really run down and we had to work hard to get it up to speed,” he said. “We pruned the trees we wanted to keep and then replaced all the Valencias with Navels. We totally redeveloped the irrigation system, got the nightshade and paspalum under control. It took 12 months to get the farm sorted out.”

Frustrated by poor prices, Tony and Pat started packing their own fruit soon afterwards. “We used to pick during the day and then pack until two or three in the morning,” he said. “Everyone thought we were crazy but you have to start somewhere. We grossed $25,000 the first year we were here. Last year, we had a turnover of more than $3 million.”

Today, Tuckers Creek Citrus is a 35-person business that packs more than 200,000 cases a year, the vast majority of which is exported to Asia and Europe. “We are only little guys in a big market, but we always get a lot of positive feedback about the quality of our fruit”.

*All application figures are provided as a guide only.