While other farmers are struggling to cope with soaring fertiliser prices, Riverina grain grower, Peter Eisenhauer, has cut costs and lifted grain yields and quality after switching to a no-till biological farming system.

“We’d plant a crop and capeweed and every other weed would come up,” Peter said. “There was something right out of balance.”

In his search for solutions, Peter attended countless field days and seminars, almost completed a Bachelor of Applied Science in Agriculture by correspondence and worked as a farm planning consultant.

Feeling there was more to farming than he was being taught, he started investigating biological farming systems. “I’d been applying lime since 1991 but I sat up and took notice when a friend put out some worm juice on his farm and got a two-year response that was way out of proportion to the amount of nitrogen in it,” he said.

“I’m a very sceptical person and money is always tight, so I couldn’t experiment without having a sound scientific base, but the lights really came on when I heard an American biological farming expert, Arden Anderson, at a conference in 1999.”

“The improved soil microbial activity is also claimed to help unlock phosphorus, calcium and sulphur already in the soil, leading to longterm benefits in soil structure…”

A handful of soil from a paddock sown to oats after several years of treatment with BioAg products. 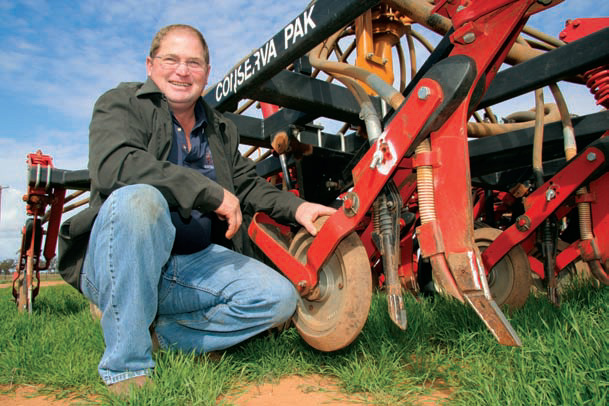 The company’s range of solid and liquid nutrients not only provide a rich source of plant-available nutrients but also introduce beneficial microbes into the soil to produce a living, healthy, and balanced soil for optimum plant and livestock productivity.

One of the company’s key products is BioAgPhos®, a reactive phosphate rock treated with a proprietary microbial culture to make it ‘biologically active’. About one third of its phosphorus content is available immediately for plant use, while the remainder is slowly digested by the microorganisms and added to the nutrient reservoir in the soil.

The improved soil microbial activity is also claimed to help unlock phosphorus, calcium and sulphur already in the soil, leading to longterm benefits in soil structure and fertility. In 2001, Peter treated part of his wheat crop with MAP and a $10 per ha mix of calcium nitrate and BioAg Balance & Grow®, a foliar treatment that feeds growing crops and pastures and improves soil microbial activity. A second test strip was treated with 100kg per ha of urea at a cost of $30 per ha.

The results of this on-farm demonstration were nothing short of spectacular, with the BioAg plot yielding 5t per ha, which was about the same as the test strip treated with the more expensive urea and more than double the yield of untreated crop!

“Last year was a real test of our farming system,” Peter said. “We had a good autumn but the rain cut out in late July Like everyone else, we cut most of our wheat and barley for hay. “We left some test strips and were amazed at the results when we harvested them. Eight hectares of Ventura wheat yielded 1.8t per ha of grain at 13.6% protein and only 1.6% screenings. 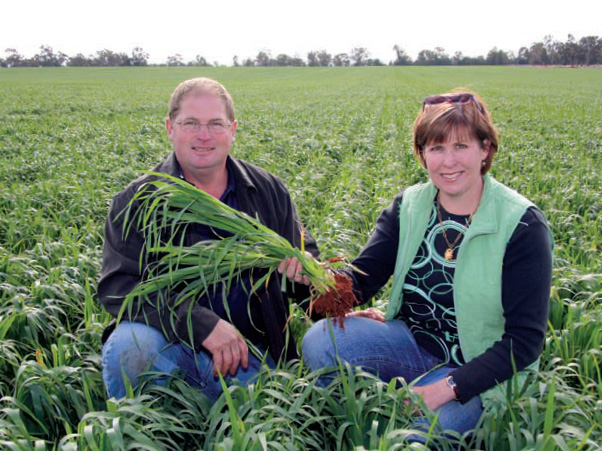 Peter and Gay Eisenhauer check Mitika oats sown in early May in a paddock treated with BioAg products at ‘Glen Iris’, Ganmain, NSW. Mitika is a dwarf variety producing oats for oatmeal and baking.

“Schooner barley went 1.9t per ha with 20% screenings, while Mitika oats yielded 1.9t per ha. These yields mightn’t sound that great but they were good in a year with such a dry finish.

“We got the same dollar-per-hectare returns from the grain and the hay because hay prices were high but this has given us the confidence to believe in our system and take the crops through to harvest in the future.”

Peter now dresses his seed with BioAg Soil & Seed™, a liquid culture that encourages rapid germination, root development and soil microbial activity. The treatment is also applied directly into the soil along with pre-emergent herbicides and then incorporated by sowing.

BioAgPhos and lime are spread as a capital application prior to sowing once every three years and sulphate of ammonia is applied once every three or four years. Small amounts of the starter fertiliser, MAP are added at sowing each year, while Balance & Grow and calcium nitrate are applied as a foliar spray at tillering.

Peter calculated that the biological fertiliser program costs $110 per hectare per year compared to $215ha year for a conventional application of urea and MAP, based on current prices of about $1000 tonne for urea and $1400 tonne for MAP.

“The combination of no-till and biological farming has reduced our costs, improved our soils and our produce and made us much more able to withstand dry years,” Peter said.

“Crop plants are more robust, with huge root systems, and the roots grow quicker. We have significantly less weeds and those we do have are generally uncompetitive.

“The combination of no-till and biological farming has reduced our costs, improved our soils and our produce and made us much more able to withstand dry years.”

“There is hardly any runoff after rain. All the rain soaks in and the soil can hold more water than before, all of which leads to higher yields and better quality grain. There is so much humus in the soil now that I reckon I could grow whatever I want without having to have any sort of rotation.

“Most of our paddocks have now grown seven crops in a row, earthworms are abundant and we can run stock without compaction occurring. To top it off, our yields and quality are up but our costs are way down.”