The adoption of biological farming techniques six years ago has allowed Victorian chaff producers, Jeff and Gae Dalton, to grow top quality lucerne on a block that had previously repulsed their best efforts to establish the crop.

The Daltons mill and bag their chaff from lucerne grown on 100ha of irrigated land which they own, lease or share-farm near Swan Hill on the Murray River.

Their business, Kiambra Stock Feeds, markets a range of premium quality bagged lucerne, oats and molasses chaff in produce stores in Melbourne, Sydney and Brisbane. The chaff is favoured by racehorse owners and trainers and is supplied to horses at the Sydney Royal Easter Show. 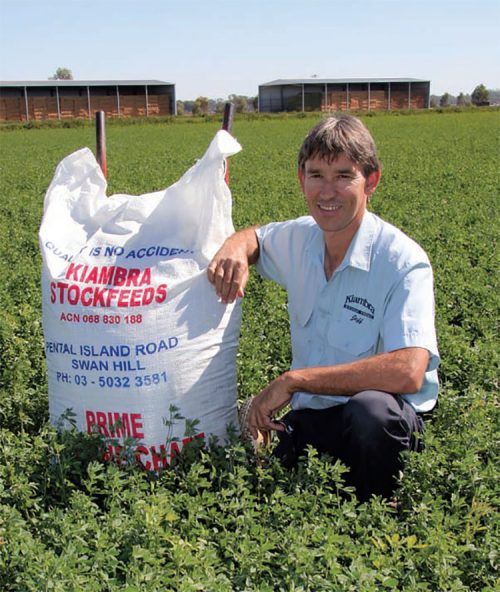 Jeff Dalton in a stand of irrigated lucerne and the finished product, lucerne chaff.

The Dalton family has been on the 53ha home block for half a century but when Jeff took over 25 years ago it was, in his words, “waterlogged paspalum, rushes, couch grass, boulders and snakes”.

Jeff worked the block with a single-tine ripper and after a brief flirtation with clover and ryegrass pastures for sheep grazing, decided to grow lucerne instead. “We started the stock feed business about 15 years ago so I was keen to grow lucerne on this block,” he said.

“We grew it successfully on our share-farmed blocks but found it wouldn’t perform here at all. Something was lacking in the soil. We’d get a good establishment but the lucerne was always yellow and wouldn’t grow.”

After applications of molybdenum, lime and even poultry manure produced only limited responses, Jeff began to investigate biological alternatives. Six years ago, he contacted Ivan Mitchell, the Deniliquin-based agent for BioAg.

After soil and tissue tests conducted by BioAg revealed low availability of functional calcium and phosphate, Ivan developed a custom-made ‘fertility program’ for the block. It incorporated a range of BioAg products, all of which are accredited organic inputs, in conjunction with conventional inputs.

“Something was lacking in the soil. We’d get a good establishment but the lucerne was always yellow and wouldn’t grow.”

Since then, the block has received an annual dose of 300kg per ha of BioAgPhos® and 500kg per ha of lime, applied each autumn with a belt spreader. Until this year, it was also treated with mono ammonium phosphate (MAP) to boost phosphorus levels.

BioAgPhos is a reactive phosphate rock that has been treated with a proprietary microbial culture. About half of its phosphorus content is available immediately for plant use, while the remainder is slowly digested by the microorganisms and added to the nutrient reservoir in the soil.

The program includes the use of a fermented liquid culture called BioAg Balance & Grow®, which stimulates vegetative growth, root development and soil microbial activity. The product is applied as a foliar spray mid-way through each cut.

“I don’t like driving through standing lucerne but I’m not game to stop using this product,” Jeff said. “The lucerne is much more even. The colour used to vary across the paddock but now it’s much more constant from one side of the paddock to the other. 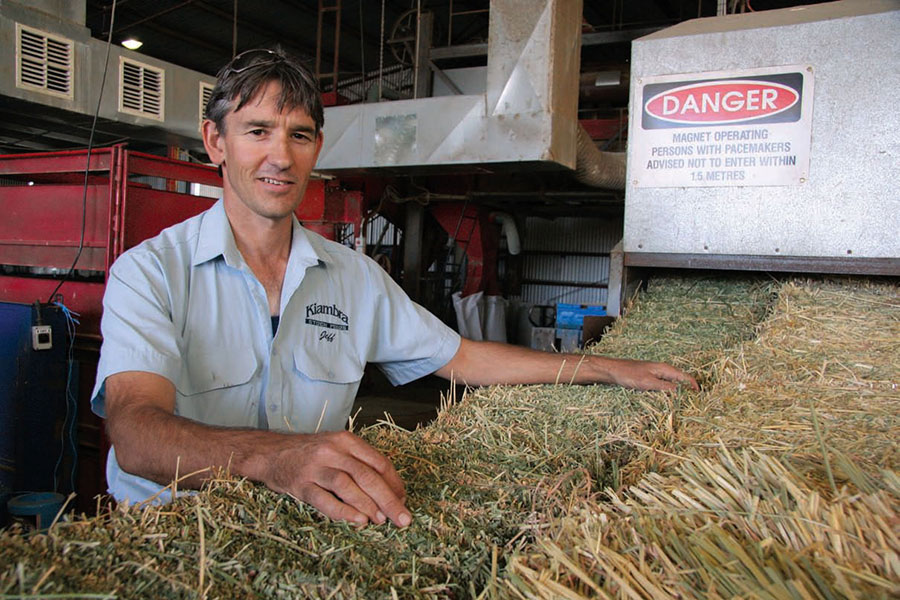 “The hay is softer in the stem and much finer. It yields heavier than it looks. We’re averaging about 3.7 tonnes per ha and some cuts we get close to five tonnes per ha.”

“The hay is softer in the stem and much finer. It yields heavier than it looks. We’re averaging about 3.7 tonne per ha and some cuts we get close to five tonnes per ha.”

“The density, softness, evenness and colour of the lucerne are probably the biggest benefits from biological farming. There’s no doubt we’re growing very good quality hay.”

The lucerne is cut five times between October and April, after which the paddocks are treated with BioAgPhos and lime. The crop is spelled during the winter, slashed in July and treated with a herbicide to control weeds in August. Each stand is replanted after four or five years.