The Humphry family’s mixed farming operation in north eastern Victoria is ample proof that biological farming can be an efficient and sustainable method of agricultural production.

The Humphry’s have successfully implemented and refined biological farming techniques for more than 30 years on their Springhurst district property, ‘Avondale’, long before such concepts even had a name or credence in the wider agricultural community.

During that time, their efforts to restore the natural health and structure of their soils have led to significant improvements in crop yields, grain quality and animal health without the use of conventional fertilisers, herbicides or pesticides. 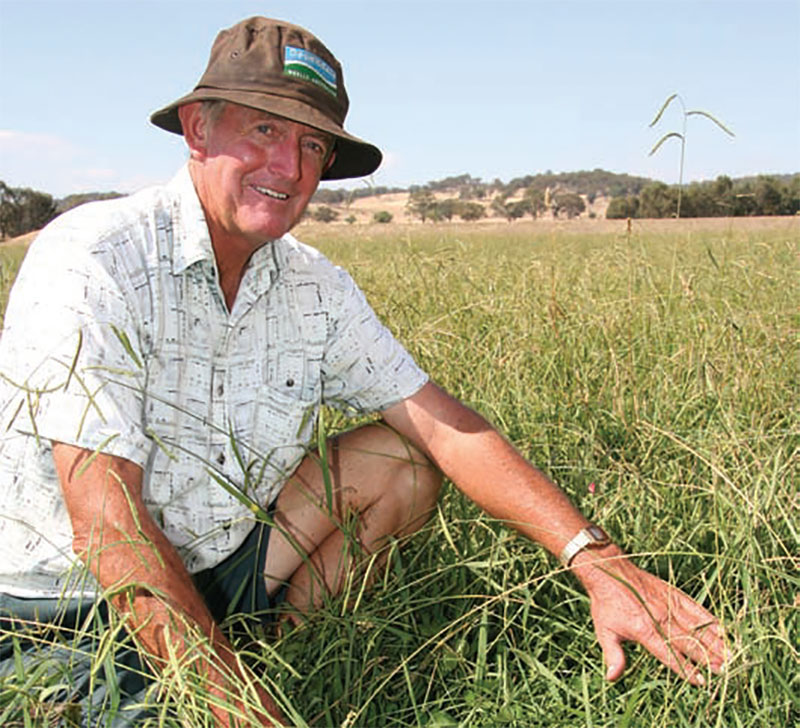 More recently, they have introduced a small flock of 300 first-cross Boer goats which will be bred up to pure status for chevon (goat meat) production to cushion the effects of poor wool prices.

The Humphrys also grow 60 ha of oats, barley and triticale for stock feed. A further 20 ha of pasture is flood-irrigated from a network of gravity-linked dams, while large amounts of pasture are cut for hay and silage.

The current productivity of ‘Avondale’ is an amazing turn-around from 30 years ago, when the property was in a state of decline. Lindsay described the family’s then management approach as ‘more-on’ farming. “We were putting more and more on and we weren’t getting any results,” he said.

The Humphry family’s mixed farming operation in north eastern Victoria is ample proof that biological farming can be an efficient and sustainable method of agricultural production.

Some of the soils, particularly those on extra land acquired 20 years ago, had become so acidic, with the pH dipping as low as 4.3, that even high rates of superphosphate failed to trigger any meaningful pasture response. Accompanying this was a marked decline in soil structure, which had become compacted and devoid of life.

They began applying lime instead of superphosphate, as well as aerating their soils in a bid to increase the amount of calcium in the soil, and making previously-applied phosphorus more available to plants.

The early response was encouraging. The soil pH improved to the point where they were able to grow lucerne in paddocks where it had previously failed. Once the phosphate reserves in the soil started running down, the Humphrys began using reactive phosphate rock in preference to acidified fertilisers.

Six years ago they then began using BioAg’s range of ‘biologically active’ solid nutrients and fermented liquid cultures. This included one of the company’s key products BioAgPhos®, a reactive phosphate rock that has been treated with a proprietary microbial culture. The Humphrys typically apply BioAgPhos at 125-250kg per ha, depending on whether the paddock is dryland or irrigated, and the frequency of application. “We’re favouring a bigger application every second year, particularly in the pastures, to cut down the workload a bit,” Lindsay said.

In the cropping country, BioAgPhos is applied with 300-400kg per ha of lime four to six weeks before sowing. The amount of lime is varied according to soil type and soil calcium levels. Seed is inoculated with BioAg Soil & Seed™, a liquid treatment that encourages rapid germination, root development and soil microbial activity.

Lindsay has also made a concerted effort to increase the size and diversity of the microbial population – including bacteria, fungi, protozoa, nematodes and earthworms – in the soil. Manure from the dairy is decomposed in a worm farm, with the resultant castings spread over the pastures and on cropping paddocks prior to sowing.

“Once the soil nutrient balance gets to a certain level, nature starts to work and it tends to balance itself,” he said. “For example, fungi produce humic acid, which is very important in the process of making humus in the soil.”

“Humus increases the water holding capacity of the soil, which means you can trap a lot more rainwater and increase the growing period of a crop. This means our pastures tend to get away a bit quicker after the autumn break, grow better during the winter months and grow longer at the end of the season.”

The current productivity of ‘Avondale’ is an amazing turn-around from 30 years ago, when the property was in a state of decline.

The results of the Humphrys’ ‘back-to-basics’ approach have had far-reaching implications for every enterprise on ‘Avondale’. The heavy clay loam and sandy granite soils are healthier, with a more desirable pH of around 6.4. The improved soil health has led to obvious flow-on effects in terms of pastures, crops and livestock.

Grain weight, yield and protein content have all improved without the use of large amounts of nitrogen fertiliser. Depending on the season, their triticale, barley and oats, grown for feed and grain, can yield up to six tonnes/ha with 18 percent protein in the triticale and barley and 16 percent in the oats.

Lindsay said there had also been a major improvement in the health and output of the dairy herd, which has an average yearly production of about 5,000 litres at 4.6 percent butterfat and 3.4 percent protein.

“We hardly had any milk fever or grass tetany last year, and we haven’t used any antibiotics in the past two years,” he said. “We use homeopathics to control animal health problems, including mastitis.”

“The quality of the pastures and the silage means we have been able to reduce the amount of grain we feed by half, which has lowered our production costs significantly.”

Lindsay’s holistic management style is reflected in his irrigated pastures, which started out as white clover, perennial rye grass, paspalum and cocksfoot but now contain more than 30 different species.

Some, like dandelions, are generally considered weeds but to Lindsay they are part of a diverse and healthy system. “The cows love the dandelions,” he said. “They’ve got a tap root which allows them to bring up nutrients and trace elements from deeper in the soil.”

“The more diverse the range of organisms that live on and within the soil, the healthier the soil’s ecosystem becomes and the ‘cycles of nature’ begin to work for us in an ecologically sustainable way.”

He said small amounts of selected nitrogenous fertilisers were helpful to feed microbes and get a biological farming system up and running. “They’ve got to have nitrogen to grow,” he said.

Rounding out the picture, Lindsay has planted thousands of trees for shade, shelter and agroforestry. “The trees provide a microclimate and habitat for birds and beneficial insects, such as predatory wasps, ladybirds and praying mantises,” he said. “Some of them are food for birds while others eat insect pests, but they’re all part of the same ‘soil food-web’.”