The experiences of a BioAg cropping customer in the Riverina show that our liquid products Soil & Seed ™, Balance & Grow®, and Fruit & Balance® offer significant improvements in yield and grain quality. 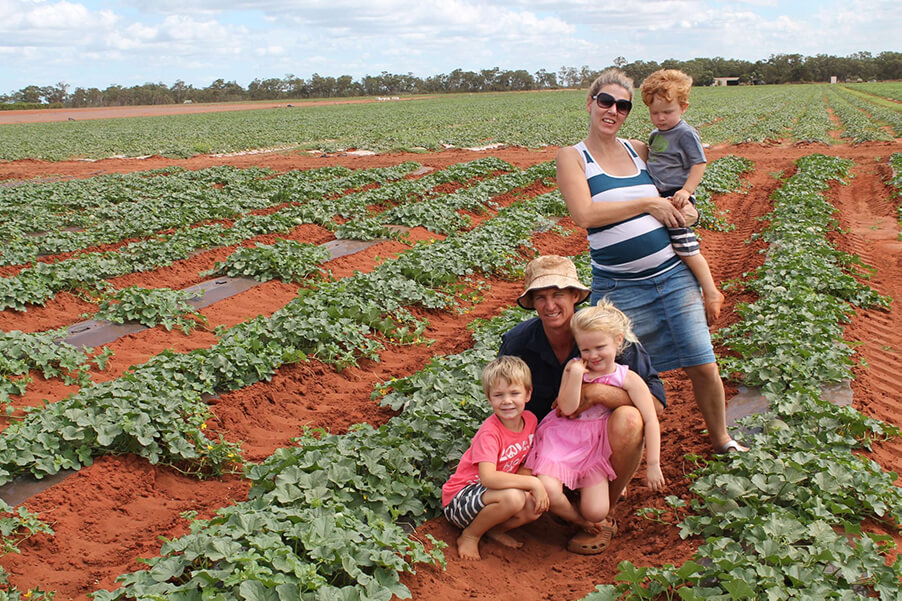 Andrew Dalglish with his family in the rock melon crop.

Andrew Dalglish and his father Charlie had been BioAg customers for around 10 years at their Eurongilly, NSW farm, Bradford Park, when they sold at the end of 2011. During this time Andrew also ran a mango harvesting business across both the Northern Territory and North Queensland, and continues to do so.

To keep himself even busier, in 2007 Andrew purchased a 3,000 acre property, ‘Panama’ between the NSW Towns of West Wyalong and Ungarie. ‘Panama’ was a run down grazing property with poor fencing and a history of inadequate fertilisation. Andrew got busy, removed the fences, filled in the melon holes, and started continuous cropping under soil and plant nutrition guidance from BioAg’s MD, Anton Barton. A couple of applications, several years apart, of poultry manure mixed with BioAgPhos® and gypsum, raised the underlying soil fertility and provided a nutritional platform from which the 2012 harvest yield results were achieved.

“Andrew was keen to do everything possible to maximise yield and quality in 2012. The planting profile was full and during the winter grain prices were rising, due to the worsening US drought”

In 2011, Andrew spread the blend of poultry manure, BioAgPhos and gypsum across much of the property as well as Soil & Seed with MAP as a starter fertiliser. The crop yields were high and most of the soil nitrogen was used growing this second consecutive big crop.

For the 2012 season Andrew decided to sow with 50kg per ha MAP and 4kg per ha zinc sulphate. Sulphate of ammonia was spread after sowing, because of the availability of the spreading contractor at rates of 80kg per ha for barley, 150kg per ha for canola and 120kg per ha for wheat. Andrew was keen to do everything possible to maximise yield and quality in 2012. The planting profile was full and, during the winter grain prices were rising due to the worsening US drought. The crops included 210ha Garnet canola, 120ha Eaglehawk wheat, 210ha of Janz Clearfield wheat, 245ha Hindmarsh barley, and 95ha Albus Lupins.

In late July, when the cereals were at the late tillering stage, and prior to the commencement of canola flowering, the vegetative foliar fertiliser treatments were applied as shown below.

Having given the crops every chance to maximise yield and quality by rigorously following the prescribed program, Andrew was a little disappointed that the spring failed, and his yield potential was compromised to some extent. He was, however, delighted with the yields and grades of grain that he produced.

Table 1 – In late July, when the cereals were at the late tillering stage, and prior to the commencement of canola flowering, the vegetative foliar fertiliser treatments were applied as shown below.

Table 2 – From mid August to early September, the following fruiting foliar treatments were applied to the canola at the early flowering stage and to the cereal crops from 2nd node to pre-head emergence.

So, realising that despite owning and operating ‘Panama’ in the Riverina, along with his mango contracting businesses up north, that he still had capacity to spare, Andrew bought a mango and horticulture farm at Katherine (NT), where he is now growing rock melons, in addition to managing his mango trees. In Andrew Dalglish the old adage certainly applies – “if you want something done well, give the job to a busy person.”

Table 3 – Once Andrew’s crops were harvested and sold, his greatest excitement came from the analysis of his potential yield and water use efficiency.